Dundee Football Club in the Community Trust (DFC In The Community Trust) was established in November 2017 as a Scottish Charitable Incorporated Organisation (SCIO), SC047946. Our purpose is to advance education and public participation in sport through the organisation of recreational activity leading to improvement in conditions of life for participants.

We use the power of football to engage and inspire people to improve their life for themselves and the communities in which they live. Our dedicated staff aim to deliver change and transform lives.

-The advancement of public participation in sport by providing the opportunity for adults & the youth within the City of Dundee and surrounding area to train and play football.

-To organise recreational activities for people in Dundee and the surrounding area with the object of improving the health, fitness and wellbeing of people of all ages and genders through public participation in physical exercise.

-The advancement of education by providing funding and opportunities for the delivery of educational initiatives.

-To improve the social inclusion of people in the community. 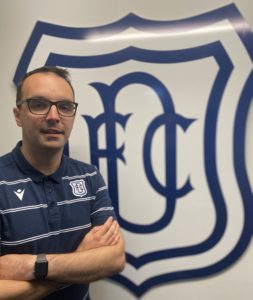 Greg joined Dundee Football Club in the Community Trust in September 2019 as Community Trust Manager. A graduate of Dundee University, Greg holds a degree with honours in Community Learning & Development (Community Education) and had placements at Kick-it Kick-Off and the Web Project as part of his studies.  Prior to joining the Trust, Greg worked within the Youth Justice sector and worked alongside Education, Social Work, Police Scotland and third sector organisations across Tayside.  In his spare time, Greg is also a Trustee of another charity in the city.

Greg started his football coaching career at Douglas Lads FC and from the age of 18 was Manager of Ferry Athletic FC for a number of years. Greg can be contacted via [email protected]

I married into a Dundee FC supporting family almost 30 years ago and have been a dark blue ever since.

I have always been involved in football in some way and in the last two decades have held many positions within Carnoustie Panmure FC including Club President. At “The Panny” I was instrumental in setting up the football academy for over 100  5-9 year olds and the Walking Football team who in their first two years competed at a tournament in Portugal, coming home with silverware on both occasions.  However my greatest achievement, to date, in a footballing sense is the Football Action group we started. This is a memories group for people living with dementia, but also includes exercise and football drills. I am proud to say I am also a Trustee with The Carnoustie Memories charity. 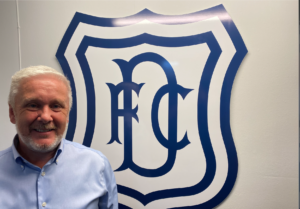 I am 61 years old and semi-retired primary teacher.

I have supported Dundee since my early teens and began to record dates and results. Why?  I don’t know.
This began to expand as the years went by into more and more details and I now have complete lever arch folders for each season including newspaper clippings from one game to the next.  It has become a monster.  But I rarely lose a bet.
I began to work on the turnstiles at Dens after my wife noticed an advert, just as I was about to give up attending matches due to lack of money after the arrival of Kara, my daughter.
I am now in my 30th year at Dens, but am now situated in the control room, logging communications on match days.
I am very proud to be part of the DFC in the Community Trust and hope to do my best in this role. 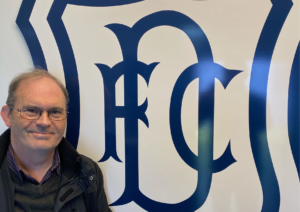 I have been a Dark Blue fan since Dundee beat Cologne 8-1.
I was honoured to serve the club in the role of finance director, for 5 years,being instrumental in facilitating the introduction of the US investment which continues to benefit us today.
I am now entering my dotage after a lifetime working as a Chartered Accountant and am fortunate to enjoy good health. Days are spent doing things I want and like: golf, photography and hillwalking.

On a Saturday I keep fit by singing at Dens Park. 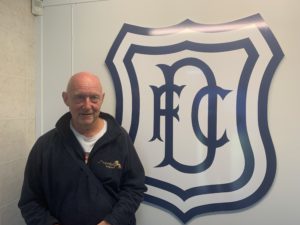 I joined Dundee Football Club in 2015 as Club Secretary, following a lengthy career as a secretary in an accountancy practice. I will always be grateful to Ian Crighton for making me aware of the vacancy at the Club. Working with the players I quickly built up a rapport with them and being keen to see them do well on the pitch, I became a dedicated Dundee fan.  Although I took ‘early retirement’ in 2017 I missed the Club so much that I returned 6 months later and now work as PA to the Managing Director and Management Team.

Keen to help charitable causes when I can, I have sponsored children for a number of years now. I also help out a close friend when I can as a volunteer for CHAS. I was honoured to be asked to join the team at DFC in the Community Trust as it goes from strength to strength improving lives in the community. 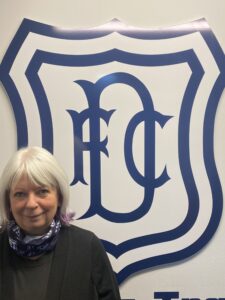 Lindsay Darroch
Born and brought up in Dundee I have been a Dundee fan for as long as I can remember. I am a Partner with Gilson Gray, Solicitors and head up our Dundee Office in South Tay street. I am currently Company Secretary of Dundee Football Club.
I was delighted, last year, to be invited to become Trustee of Dundee FC in the Community Trust. I am very proud of the impact the Trust has had in our local community and will endeavour to support the Trust with its future progress to enable this impact to continue.
In my spare time I enjoy hillwalking and am looking forward to taking part in the Trust’s hillwalking club.

Dundee FC Community Trust uses the passion for the club and its ethos of self-belief, belonging and youth development, to engage those who need our help.

By leaving a gift in your Will, you could leave your own legacy by helping us to continue inspire, transform and deliver change to our community.

We would like to thank all of our donors for the incredible support they have given the Trust. Together we inspire, we deliver change and transform lives in our community.