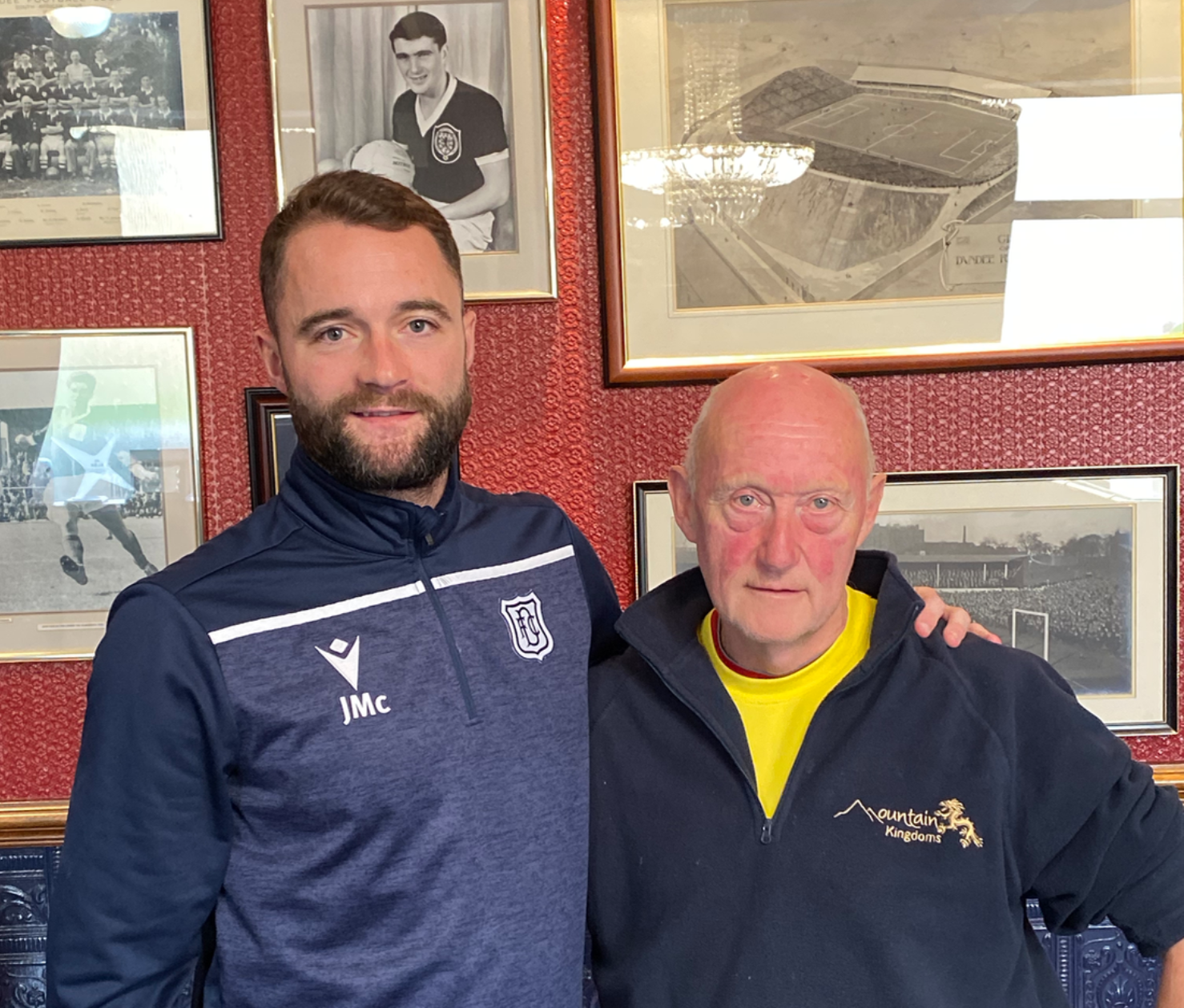 The road to Annapurna

Today, October 19, is the day our Trustee Ian Crighton sets off to Nepal. Here is his blog of how he got here, if you are inspired by his story please donate to the Trust & support Ian! https://www.justgiving.com/fundraising/ian-crighton4

The road to Annapurna

January 19 – weigh in at 182 pounds -13.5 pounds – exactly 9 months to trip departure.
Weight to be monitored monthly and calorie input and output recorded using Fitbit and MyFitnessPal .

January 29 first training walk – with Ian McGrouther who is going to Everest base camp – aged 72 – needs to get fit. Route is to do East and West Lomond know as the Paps of Fife. It snowed overnight and there is a covering on the hills and the track to the car park. It is very windy so we walk past the peak ofEast Lomond and head for West Lomond along an icy track. Quite a strong wind as we ascend West Lomond but rain stops as we summit and we are rewarded with great views over Fife through  clouds below

February 5 – Loch Brandy with Ian. A short sharp walk usually with the option of the snub. The roads were covered with snow and the path up was very icy at the bottom where the snow had melted and refrozen. The path. Up the hill was covered on thick snow and we followed footprints of previous walkers. We go to the lochside and decided to descend as opposed to doing the snub as visibility was deteriorating. Just short of the car park Ian slipped on the ice and suffered a heavy fall injuring his leg and his wrist.

February 13 – Ian McG out with injury so decided on a short 2 hour walk up the Sidlaws. My only company for the day were the sheep.

February 19 – Mount Keen was the target Hill for the day. Ian still out injured so Grant joined me for the walk.

February 26 – First visit of many to Glen Doll car park. The route this time is Corrie Fee Mayar and Dreish returning via the Kilbo path. This is probably the most popular walk in the area. Ian McG was back for this one. The forest at the bottom of the Kilbo has been felled and the Jocks Road and Corrie Fee are how visible from the path. The path itself has also been repaired and is a bit easier.
Weigh in Feb 28 – 175 pounds

March 5 Ian is today’s tour guide and he took us out of theGlen Doll car park and up Bachnagairn to Broad Cairn. We hit the snow line after crossing the bridge at Bachnagairn and the top of the walk was on snow covered paths and then over a snow covered boulder field. A very tricky ascent and decent with me up to my waist in snow at points when I stepped in the wrong place. Nice wee snowstorm on the summit.

March 19 – The weather dictated a return to Mount Keen – snow had fallen over the weekend and Glen Doll had too much snow. Ian was on this walk. It was all straight forward until the return crossing over the burn by Queens Well. The stream had risen by 6 inches due to snow melt so it was a paddle through the burn instead of a boulder hop. We got water filled boots.

March 26 grant and Ian in tow we went back to Loch Brandy. This time completing the Snub as well. No mishaps nice day

April 9 Ben Cleuch circular out of Tillicoultry with Grant not too long but a bit cold and misty on the tops after a steep scramble out of the valley.

April 16 Loch Brandy and Loch Warrell with Grant and Bob Scott very boggy and snowy between the two lochs over the peat hags. Boots overtopped a couple of times.

April 23 Tolmont and Tom Buidha with Grant – nice walk a bit marshy in bits and a scramble across the White Water before the descent back to Glen Doll. The Davys Burra refuge undergoing maintenance.

April 30 An old favourite done backwards – up Kilbo paths onto Dreish then to Mayar and down through Corrie Fee. Really busy up in the hills today

May 7 – poor weather so headed to Pitlochry and Ben Vrackie – first time on this hill. Poor weather started in the rain but when I got to the bottom of the big ascent the snow started. Reached the top in a blizzard couldn’t see anything so turned and headed home. Snow all the way.

May 14 on my own again . Broad Cairn Cairn Bannoch Fafernes, Crow Craigie and down Jocks Road. Longest walk this year, nicest weather – 23 degrees at 6pm. When I got back to the car. A nice encounter with Ptarmigan on Fafernes and a snow bunting on Cairn Bannoch.

May 30 – Angus walking week back up Tolmont and Tom Buidhe. Started raining when we left Glen Doll and was even harder rain when we got back some 5 hours later. Big scramble accross the White Water which was in spate.
May 31 weigh in 161 pounds

June 1 second walk in the Angus walking week. 4 Munro’s out of Glen Shee. At the end the by now normal, scramble a cross the burn.

June 2 – my third walk in Angus walking week. The Ministers path from Glen Prosen accross to Glen Clova. Started raining at the start and never let up till we got to the Clova Hotel. We had a ranger with us, Linda was with me as well. Got lots of interesting info on the fauna and Flora including some carnivorous plants.

June 5 – off on my own to climb Schehallion.A nice if steep walk. Big boulder field at the top. It was very busy with lots of people on the summit.

June 11 – Grant in tow we headed to Blair Atholl and to Bheinn Glass. A large mountain with 4 peaks and 3 Munro’s. A very steep climb and then tracks accross a winding ridge to top 2 then another travers to the 3rd Munro. This was a scree covered path and then scramble over boulders. On the way down I had a bad fall damaging shins hands and my left knee. Didn’t do fourth peak. The path back down was difficult and boggy. Grant fell over on his way down . When back off the hill there was then a long walk back in. Tired and hungry it was 7 pm until we got to the car. We had to stop for tea in Dunkeld, we had white pudding supper and chips. Food tastes great when you have worked for it.

June 16 out with the National Trust. We met at Mar Lodge, got driven to Coylumbridge in a minibus . A fantastic walk back to Mar Lodge via the Lairig Gru one of the great passes in Scotland which reaches Munro height at its highest point , the pools of Dee. A great day with great company.

June 29 Out with the Dundee Ramblers to do Jocks Road. We got dropped on the Braemar road at Glen Callater. The day started in t shirt order and the weather deteriorated through the day. We reached Davys Burro in the dry. Then the problems started, we walked the last hour in torrential rain with thunder and lightning flashing round our heads. Very scarey stuff.
June 30 weigh in 161 pounds

July 3 back in solo order, I walked up Ben Chonzie. Probably the most disappointing hill I have walked up this summer.

July 28 Grant joined me as we did Broad Cairn Cairn Bannoch and back down Jocks Road to Glen Doll. It is a fantastic if long walk. Nice encounter with a Dotterel as we descended Fafernes.
July 31 weigh in 161 pounds

August 16 – a 17 mile street walk starting from home, into town, up the Law, Balgay Hill, Ninewells, Invergowrie and through Riverside Country Park concluding in Mennies for a pint of Tennants . Bus home after.

August 19 The DUNDEE kiltwalk from St Andrews to Monifieth. By the end feet shredded and blistered for the first time this year. Weather was cloudy then rainy then sunny to finish. Never again give me the hills anytime. Raised over £600 for the trust so not all bad.

August 22 back to Glen Doll and Corrie Fee Mayar and Dreish. Lindsay and Grant in tow this time.

October 8 Short walk over the Sidlaws with Grant.

That is the training over – real thing starts October 19.

Set up a standing order with the Community Trust and enable the Trust to help even more people in our community. Your donations can really change peoples lives and help the trust put on even more community programs and help the trust plan for the future. Please click onto the support us tab to find out more information and set up your standing order.

DFC in the Community Trust are proud to pair with Dundee Football Club, the SPFL Trust and Alzheimer’s Scotland to deliver a range of projects across Tayside, Fife and Angus.